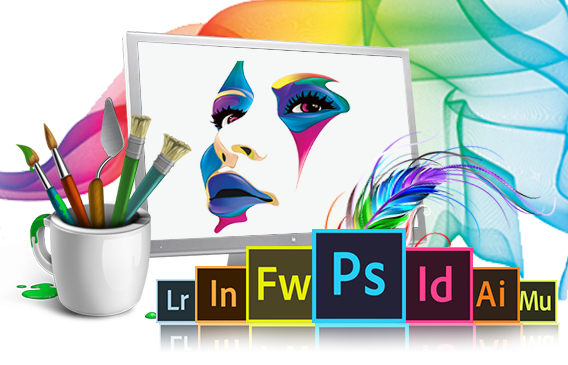 Graphic design is the process of visual communication and problem-solving through the use of typography, photography, and illustration. The field is considered a subset of visual communication and communication design, but sometimes the term “graphic design” is used synonymously. Graphic designers create and combine symbols, images and text to form visual representations of ideas and messages. They use typography, visual arts, and page layout techniques to create visual compositions. Common uses of graphic design include corporate design (logos and branding), editorial design (magazines, newspapers and books), wayfinding or environmental design, advertising, web design, communication design, product packaging, and signage.

The term graphic design was coined by William Addison Dwiggins in 1922.[2] However, the origins of graphic design can be traced from the origins of human existence, from the caves of Lascaux, to Rome’s Trajan’s Column to the illuminated manuscripts of the Middle Ages, to the neon lights of Ginza, Tokyo. In “Babylon, artisans pressed cuneiform inscriptions into clay bricks or tablets which were used for construction. The bricks gave information such as the name of the reigning monarch, the builder, or some other dignitary”.[3] This was the first known road sign announcing the name of the governor of a state or mayor of the city. The Egyptians developed communication by hieroglyphics that used picture symbols dating as far back as 136 B.C. found on the Rosetta Stone. “The Rosetta stone, found by one of Napoleon’s engineers was an advertisement for the Egyptian ruler, Ptolemy as the “true Son of the Sun, the Father of the Moon, and the Keeper of the Happiness of Men”” [3] The Egyptians also invented papyrus, paper made from reeds found along the Nile, on which they transcribed advertisements more common among their people at the time. During the “Dark Ages“, from 500 AD to 1450 AD, monks created elaborate, illustrated manuscripts.

In both its lengthy history and in the relatively recent explosion of visual communication in the 20th and 21st centuries, the distinction between advertising, art, graphic design and fine art has disappeared. They share many elements, theories, principles, practices, languagesand sometimes the same benefactor or client. In advertising, the ultimate objective is the sale of goods and services. In graphic design, “the essence is to give order to information, form to ideas, expression, and feeling to artifacts that document human experience.”[4]

Graphic design in the United States began with Benjamin Franklin who used his newspaper The Pennsylvania Gazette, to master the art of publicity to promote his own books and to influence the masses. “Benjamin Franklin’s ingenuity gained in strength as did his cunning and in 1737 he had replaced his counterpart in Pennsylvania, Andrew Bradford as postmaster and printer after a competition he instituted and won. He showed his prowess by running an ad in his General Magazine and the Historical Chronicle of British Plantations in America (the precursor to the Saturday Evening Post) that stressed the benefits offered by a stove he invented, named the Pennsylvania Fireplace. His invention is still sold today and is known as the Franklin stove. “[5]

American advertising initially imitated British newspapers and magazines. Advertisements were printed in scrambled type and uneven lines that made it difficult to read. Franklin better organized this by adding 14-point type for the first line of the advertisement; although later shortened and centered it, making “headlines”. Franklin added illustrations, something that London printers had not attempted. Franklin was the first to utilize logos, which were early symbols that announced such services as opticians by displaying golden spectacles. Franklin taught advertisers that the use of detail was important in marketing their products. Some advertisements ran for 10-20 lines, including color, names, varieties, and sizes of the goods that were offered